Salt therapy – what can you expect?

Salty air is good for your health! It has been known and used as a medical therapy for centuries. Of course, its effects are not as fast as those of a steroid pill. On the contrary, it has no risk to your health (which is not the case with steroids). If you don’t know exactly what to use it for, how to use it, and especially what to expect from it, read this!

What is salt therapy for?

If you’ve been running a fever of 40 degrees due to pneumonia or have been having trouble breathing for days due to a flare-up of your chronic bronchitis, don’t expect a few puffs of salty air to instantly fix you up. I’ve had several calls from people who (misinformed about salt therapy) expected an instant cure for their child with a fever and flu that had been running for days from a single application of a salt therapy device. They were surprised (or rather questioned me 🙂 ) that he was not cured within the first five minutes.

So let’s see what salt therapy is good for?

The Department of Otolaryngology at Semmelweis University has been studying the disease-preventive effects of salt therapy in school groups. Half of the group received salt therapy before the epidemic was even known. The result of several weekly treatments was that those who did not receive salt therapy were twice as likely to get sick, had more severe symptoms and took longer to recover. The researchers suggest that salt therapy can prevent frequent colds in children, but it can also reduce the time needed for treatment and the amount of medication needed for recovery. Feeding children less “poison” is a huge advantage.

Hay fever, allergic rhinitis, respiratory allergies, croup attacks, colds, flu and other respiratory infections should be prevented in a similar way – starting a few weeks before the “season”.

As a complementary therapy to medical treatment

Severe respiratory illness (pneumonia, COPD, cystic fibrosis, severe flu) cannot be treated with salt therapy alone. However, it is an excellent adjunct to medical treatment. The microscopic salt particles inhaled through the air reach the very depths of your lungs. They adhere to the walls of the airways where they exert their beneficial effects. They help to kill pathogens, dissolve mucus and neutralise foreign substances (dust, pollen, allergens).

How does this benefit you? Your symptoms are reduced, you need fewer medications, the illness goes away faster, and you don’t develop a flare-up or end up in hospital. You can use it for a range of conditions

Effective salt therapy? Where? How?

You can’t expect a therapeutic effect from turning on your salt lamp occasionally for its mood-altering light.

Salt pipes are not a good solution either. For one thing, you have to “suck” the salt out of it, which a small child cannot do properly. Another disadvantage is that the salt particles are very large, so they settle in your mouth and throat and do not reach the depths of your lungs. They are only useful in the upper respiratory tract, e.g. in cases of sinusitis, COPD, bronchitis. For allergies and infections, the saltpipe has little effect and is not very good at prevention.

A great program is to go to a salt cave and pay for an hour. It will certainly relax you! But the effect is minimal! You can expect this if you spend at least 1, but preferably 2-3 hours in the salt cave every day for 10-14 days. Any shorter than that is a waste of money.

This way you can use it whenever you want and if you choose well, your additional costs will be minimal. State-of-the-art salt therapy devices emit salt particles smaller than 5 microns, which can reach the very depths of your lungs.

Watch out! Some devices use a salt cartridge, which will empty after a few weeks of use and you will need to buy a new one. Replacing these can cost more than the machine itself over a year. The machines with salt deposits are cheap, but you get the “blackmail” of running them.

For example, it’s worth choosing the SaltDome salt therapy machine. It’s easy to refill, producing a salt vapour from a simple salt solution (salt dissolved in water) by ultrasonic atomization. You won’t have any significant extra cost with this, as half a kg of rock salt is enough for 5-8 years even if you use the device continuously. 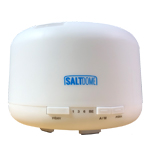 The more time you spend in the salt air, the better the effect!

Salt therapy is more effective the longer you spend in the salt air. The right duration is a few hours a day. You usually don’t spend that much time in one place during the day, and neither do your children.

You spend most of your time, and in peace, sleeping in your bedroom. It’s best to use salt therapy here too. Operate the SaltDome salt therapy device no more than one to one and a half meters away from your head, all night long. You can turn it off during the day, since you won’t be home anyway.

If you’re desk-bound at work, you can use it here too and enjoy the benefits all the time. No worries! The salt air won’t ruin your technical equipment or leave a coating on your furniture (if it didn’t, you wouldn’t be able to live on the beaches because all your technical items would be ruined)

Salt therapy is like a seat belt in a car that you almost don’t notice when it’s buckled. Normally it has no role. But if you get into an accident, it will protect you from injuries, or at least they won’t be as severe as if you were to crash without a seatbelt. In other words, it’s definitely an advantage.

If you start using salt air when you’re healthy, you won’t notice much of a change. But when you look back months later, you realise that you haven’t had a cold in a long time, you haven’t had an allergy flare-up or even hardly need to use your medication, your severe COPD is at rest and you haven’t been forced into hospital.