Peyronie’s disease is a lesion affecting the penis. Hard nodules form in the penis, causing it to become increasingly curved. In some cases it is painful and in advanced stages it makes sexual intercourse impossible. Despite this, only a small proportion of those affected go to a doctor because they are ashamed. If you notice such a complaint, consult a doctor – a urologist or andrologist is the right one. The sooner you start treatment, the better your chances of stopping the progression or eliminating the complaint. Read on for more details!

What is Peyronie’s disease?

Sexual stimulation causes blood to flow into the so-called cavernous bodies that run the length of the penis. The cavernous body expands, the pressure increases and it becomes harder. Erection of the penis occurs. During Peyronie’s disease, a hard plaque appears in the connective tissue that covers the cavernous body. The number of elastic fibres decreases while that of fibrin and collagen increases and calcification occurs between them. The result is a “cartilage or bone” hardness to the touch. 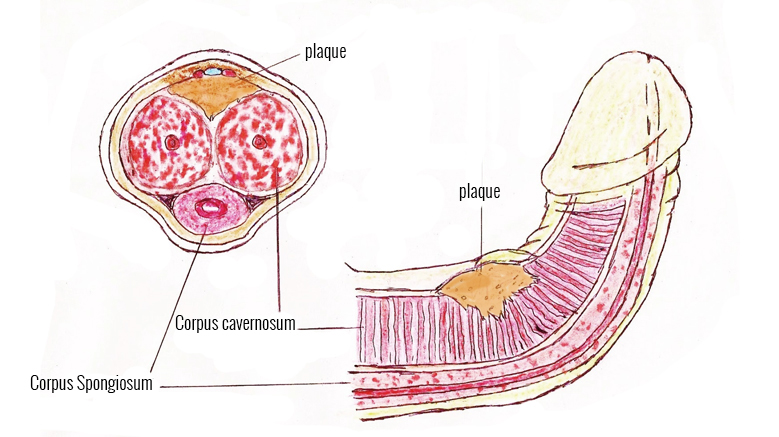 The curvature is mainly visible during erection (in severe cases also at rest). The plaque “does not allow” the cavernous body capsule to follow the increase in size during erection. On the side towards the plaque, the penis is unable to dilate. Its shape becomes distorted and curved. It can cause pain, erectile dysfunction and even impotence.

As the curvature increases, the problem worsens:

The cause of Peyronie’s disease is not yet known exactly. A substance called fibrin is responsible for the formation of penile plaque. This protein plays an important role in maintaining a healthy body (including blood clotting and the formation of scar tissue). If there is too much fibrin, it can lead to the formation of blood clots, causing heart attacks, strokes or pulmonary embolisms.

In Peyronie’s disease, fibrin at the site of microscopic damage to the penis is carried from the bloodstream to the penis and deposited. This forms the basis for plaque formation.

Other factors that play a role in the development of Peyronie’s disease:

When to see a doctor?

In general, the sooner treatment starts, the greater the chance of success. If you delay treatment for months, you may “run out” of time in which it can be reversed.

In some cases (unfortunately, this is the rarest), the problem will go away on its own. It is more common that you cannot get rid of it without treatment.

If your penis has recently changed shape, become curved or has nodules, you should see a specialist in a urology or andrology clinic as soon as possible. Early stage Peyronie’s disease can be treated with certain medicines. If there is a delay, the chances of proper treatment decrease.

How can Peyronie’s disease be treated?

It depends on the severity of the disease…some of these can only be done by a doctor, but there are also home treatments. These can be used under the guidance of your doctor after an examination.

With oral medications, the aim of treatment is to reduce the size of the plaque, pain in the penis and curvature. The disadvantage of oral medicines is that a large part of the drug is broken down in the digestive system and only a very small part of it reaches where it is supposed to: the penis.

A drug is injected around the plaque. Yes, the needle is inserted directly into the penis… Obviously, this should only be done by a competent doctor under the strictest sterility, but it is still not a pleasant method.

The aim of this treatment is not to obtain sexual pleasure, but rehabilitation. The vacuum pump is an effective tool for the physical “training” of the cavernous bodies.

It creates a vacuum in the tube surrounding the penis, which produces an erection within 60-90 seconds. Maintain the erection for 2-3 minutes. Then break the vacuum – the erection will cease. Repeat the exercise 4-5 times. This is a single treatment. If you have time, repeat 2-3 times a day.

It is effective in improving the arterial blood supply to the penis and surrounding tissues, thereby increasing the body’s self-healing processes. According to some reviews, it also activates macrophage cells (certain white blood cells). These break down excess fibrin, which leads to plaque loosening.

In this case, one of the effects of ultrasound, “phonophoresis”, is exploited. The ultrasound vibrations open the pores of the skin and “plunge” the active ingredient deep into the skin. Rub the cream or gel into the skin above the plaque. Ultrasound phonoresis can be performed in a physiotherapy practice or even in your own home. Home ultrasound machines are not expensive. The treatment technique is simple and safe to perform at home after proper education.

The treatment uses a weak and harmless electric current. Ionic (electrically charged) active ingredients flow between the two poles of the current. The advantage is that the active ingredient can be delivered directly and in large doses to the plaque. And all without the needle prick. You can also get iontophoresis treatment in a physiotherapy practice. It can also be done at home after proper education. You need an electrotherapy device that can also perform iontophoresis.
The medication to be used for iontophoresis treatment will be recommended by your doctor. Iontophoresis requires active substances dissolved in water, such as solutions for injection. The most commonly used agents are verapamil, lidocaine and dexamethasone or a ‘cocktail’ of these.
Studies have shown that verapamil treatment should be started early, when the curvature is less than 30° and the plaque has not yet started to calcify. The likelihood of later surgery was higher in those whose plaque had not improved by 3 months of verapamil treatment.

I already mentioned that at the first sign of a problem, you should consult a specialist immediately. In the early stages, Peyronie’s disease can be treatable and reversible! Treatments can be done in a physiotherapy clinic. If the lack of intimacy is bothersome, you can get a home ultrasound and/or iontophoresis machine and treat yourself safely. Use only the medication your doctor recommends for treatment!